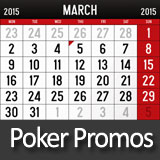 There are some awesome online poker promotions running this March 2015 offering players more value when they play poker online at their favorite poker sites.

The best promotion we've found is with out a doubt the 888 Poker Battle of Nations which has over $800K in cash and prizes to be won for FREE!

Tournament poker players can take advantage of the Sunday Million Anniversary 2015 on PokerStars which features a guaranteed prize pool of $9 million.

Online qualifiers for the WSOP 2015 have started at some poker sites, Titan Poker Viva Las Vegas promotion has several routes to win a prize package to the WSOP Monster Stack tournament.

See the selection of online poker promotions of the popular poker sites that are taking place this March 2015.

There is are daily $1,000 freerolls which are country specific, the top 5% of players in each freeroll qualify for the weekly $20,000 freeroll. Every Sunday the $20,000 Battle of Nations freeroll will feature top players from countries around the World.

Players can get up to $88 free and tournament tickets when signing up or by spinning the wheel on the daily Globe of Fortune game.

Start qualifying now for your ticket to the series by playing the daily satellites which start from as low as $1.

Prize packages are valued at €5,000 and include: WSOP Monster Stack buy-in, travel and accommodation. There are four qualifying routes to get to Las Vegas: Depositors Freerolls, Super Satellites, Twister Poker the and the iPOPS leaderboard.

Don't miss the PokerStars Sunday Million Anniversary 2015, the biggest prize pool to date with $9 million guaranteed. Each year the prize pool for the biggest weekly tournament increases to celebrate it's birthday.

Play the PokerStars Sunday Million on Sunday 8th March, 2015 to play for your share of the massive nine million prize pool.

Players can start qualifying for their seats through daily satellites or buy-in directly on the day of the tournament for $215.