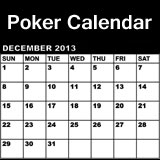 Get your piece of the action this December with guaranteed poker tournaments and series scheduled for the festive season.

There are millions to be won in Xmas poker promotions, don't miss your chance to win, add these events to your poker calendar.

There are a variety of events to satisfy everyone from micro stakes to high roller players.

Tournament poker players have a choice of poker sites where they can find the best value poker tournaments online during the Christmas holidays.

See the promotions below to get your share of the added value for players this Xmas season, new players can download the poker room software and get a first deposit bonus.

The 888 Poker Super XL Series is currently underway with a selection of daily guaranteed tournaments scheduled from 1-8 December.

Tournaments will be running daily with a total of more than $2.5 million guaranteed throughout the series. The Super XL Series has tournaments for players at all stake levels and includes Main Events for each level.

See the Super XL Series schedule for all the events in the online poker series at 888Poker.

PartyPoker will host the Micro Turbo Edition of the PokerFest this season, events will run from 1-15 December.

There is also four PartyPoker Pokerfest Missions where players can win tournament tickets by completing their objectives on the poker tables.

For more information see the Pokerfest Micro Turbo Edition schedule for your chance to win big, buy-ins range from as low as 11¢ up to a maximum of $22.

PokerStars have included the December Festival to their promotions with added value to the Sunday Major tournaments and the first ever WCOOP Challenge Series.

There is more than $27 million to be won on PokerStars during the December Festival, promotions are not only limited to tournament players as there are cash game and SNG promos as well.

The PokerStars WCOOP Challenge Series runs on the weekend of 20-22 December and has more than $10 million in guaranteed prize pools spread across 8 events.

Check the PokerStars December Festival for more information on the promotions available.