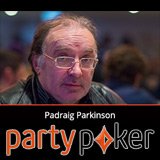 Padraig Parkinson joins Team Party Poker as the latest ambassador to represent the brand in Ireland and major live tournaments around the World.

It's been exactly two years since Shane Warne and Parkinson left Team 888 Poker, now Parkinson has moved on to join the growing list of PartyPoker ambassadors.

Padraig Parkinson signs up as the latest PartyPoker ambassador joining a roster of poker pros and sporting legends that represent the brand.

The Irish poker pro needs no introduction with a live tournament earnings exceeding $1.7 million with major tournament wins dating back to 1994.

Padraig Parkinson comments: “I am proud to join the partypoker team of ambassadors and am extremely excited about the live opportunities that partypoker LIVE will bring to Ireland in 2017. With the support of partypoker I look forward to continuing my work to grow the Irish poker community.”

His signing comes at the right time with the upcoming Party Poker Grand Prix Cork tournament taking place in Ireland this February.

Head of the Party Poker Group is just as excited about the signing and stated: “It is a pleasure to have Padraig join the partypoker team as an ambassador and we are delighted to have such a highly regarded and well-known professional representing us in the Irish market.”

There seems to be many pro players switch between the two brands PartyPoker and 888poker. After many years of service to PartyPoker Kara Scott joined Team 888poker at the beginning of last year. Parkinson represented 888poker for many years in the community, blogging and supporting the brand at major tournament around the World.

Now as a ambassador for PartyPoker you catch Parkinson at upcoming live Irish poker events including: Northern Cup at Green Isle Hotel in Dublin this January, Grand Prix Cork in February and the PartyPoker Millions at Dusk Till Dawn this April.