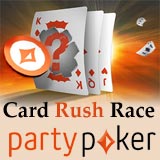 To participate players must earn two PartyPoints for each instant scratch card which offers a guaranteed mystery prize. The PartyPoker promotion runs until a million scratch cards and prizes have been claimed or the promotional dates.

Increase your chances of winning by claiming the maximum amount of five scratch cards per day, that's only 10 PartyPoints daily.

Players can also win race points from their scratch cards, these points are for players to rank in the leaderboard where they can win their share of an additional $16,500 in cash prizes.

For every two partypoints earn at PartyPoker between July 14 until August 3, players will receive a scratch card with an instant prize. Players are limited to earning just five cards per day during the promotion dates or until a million cards and prizes have been awarded.

Players must use the $500 Card Rush freeroll tournament tickets to play the freeroll which runs twice daily until 8 August.

Players will rank in the leaderboards by winning race points from scratch cards which range from 1-20 points, prizes are paid out based on how many Party Poker Card Rush points have been earned during the promotion.