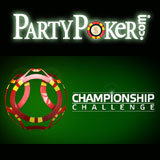 The Party Poker Championship Challenge is your chance to win extra cash prizes up to $100,000 this summer. The promotion is similar to the World Domination promo but is instead themed around football.

To win cash and PartyPoker freeroll tickets earn PartyPoints to unlock random football players for instant prizes. Collect all the players to complete a team for even bigger prizes.

Collect your first football player card by earning 5 PartyPoints, additional cards can be unlocked thereafter at 10 PartyPoints per card. Players can collect up to 100 random player cards per day to win instant prizes, collect as many as you can during the promotional dates.

Collect players, teams and groups to increase the value of your prizes, complete your collecting of teams or groups, there are four players per country to collect: Goalkeeper, Defender, Midfielder & Striker

The following prizes can be won in the PartyPoker Championship Challenge, collect the players, teams or groups to claim your cash prize or freeroll entry.