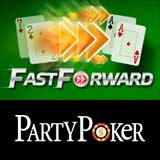 Party Poker FastFoward is officially out of beta mode and players can now enjoy the fast paced poker game as a permanent feature on the PartyPoker software. The fast fold poker format was launched in beta mode just less than a month ago.

FastForward Poker is available in play money and real money games starting from Micro Stakes, heads-up poker games are a unique feature of the software.

This is just one of the many new features and upgrades being implemented before relaunching the PartyPoker brand in 2013.

Party Poker FastFoward is an action packed new poker game where players can instantly fold their hand as it is dealt. When clicking on the forward fold button players are directed to a new table with different opponents and Hole Cards.

In Party Poker FastFoward, players can play up to four tables at once in the same player pool which start from stakes as low as $0.01/0.02 up to $5/$10. FastFoward Poker can also be played Heads-up, Omaha poker games are also available.

Get a special Party Poker Welcome Package when making a first deposit at PartyPoker before the 14th September 2012.

Party Poker Tony G's House is a new poker promotion running from the 3 September - 7 October, 2012. There is more than 200,000 in prizes including a VW Golf GTI, TV's, gaming consoles and much more players can raid from Tony G. Qualify for the PartyPoker Daily Giveaway tournaments by earn just 1 PartyPoint.

The PartyPoker Million Autumn 2012 is a million dollar guaranteed poker tournament which takes place on the 4th November 2012. Qualify in the daily satellite tournaments which start with buy-ins from as low as $1.