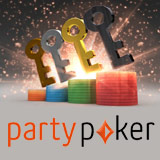 The new Party Poker Loyalty Program 2.0 will launch this March 2015 offering players more value for their poker points from the store.

The point requirements of new loyalty program have been lowered on some levels making it easier for players to get to higher loyalty levels for less points.

To celebrate the launch of the new Party Poker Loyalty Program there will be two promotions running from 1-8 March: Freeway to $500K and Loyalty Launcher.

Get even more value that ever before with the new Party Poker Loyalty Program 2.0 which makes it easy to climb the loyal levels.

There are some special promotions running to celebrate the launch of Loyalty 2.0. Get your entry into the Freeway to $500K or claim your cash prize in the Loyalty Launcher.

The new Party Poker Loyalty Program 2.0 launches on 1st March with the major change being the amount of points needed to get to the next loyalty level.

All new players start on Bronze level to reach the next level players will now only need to earn 50 points instead of 400 points. See the point earning reductions below for each loyalty level.

Players will also get up to 22.22% extra when converting party points to cash when the new system launches on 1st March..

Points can also be exchanged into tournament tickets to the weekly loyalty tournaments.

There is a special $500K Guaranteed tournament taking place on the 1st March, players can start qualifying for their entry into this event.

The Party Poker Loyalty Launcher runs from the 1st - 8th March and pays out players cash prizes for reaching the milestone point requirements.

The amount of cash paid is based on the loyal level of the player and how many points they have earn during the promotional dates.

Earn 25 points to get the maximum prize of $5 in cash.

Gold level players will get 25% extra points when playing during the promotional dates to get up to $50 in cash.

Palladium level players will get 50% extra points when playing during the promotional dates to get up to $200 in cash.