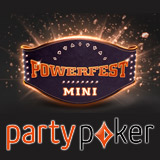 There will also be a Powerfest Mini Series leaderboard running which payout more than $20,000 in tournament tickets to the Powerfest PartyPoker Series.

Micro-stakes players get ready to play for your share of $40,000 in prizes pool when the Party Poker Powerfest Mini series kick off this September.

On top of the guaranteed prize pool there will be a leaderboard running which payout an extra $20,000 to the top 500 players in tournament tickets to the upcoming Powerfest series.

To rank in the leaderboard players must play as many events in the Powerfest Mini Series as possible and finish in top positions to earn points.

To register and play all the Powerfest Mini Series events in the series would cost you less than $25. The biggest buy-in amount is just $2.20, including the Main Event which guarantees a $10,000 prize pool.

Signing up to Partypoker is easy, just click on the link above, download the poker software, register as a new player and make a first deposit to claim your welcome bonus up to $500.

The Powerfest PartyPoker Series returns this September with over $10 million in guaranteed prize pools spread across 198 online poker tournaments.

The Powerfest tournament series is scheduled to take place between 4th-25th September, 2016 three weeks of non-stop tournament action at PartyPoker.

The series features four different stake levels with direct buy-ins starting from $5.50, satellite tournaments offer players the chance to win entry from as low as 1c.