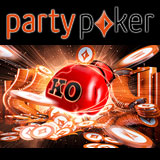 All players have a bounty on their heads which increases in value every time they knockout another player from a progressive KO tournament.

The Progressive Knockout tournaments run daily at 9pm with a special edition on Sundays with bigger guaranteed prize pools.

The tournaments are available in three different stake levels with buy-ins ranging $5.50 up to $109.

Play for your share of the progressive bounty prizes in the new Party Poker Progressive Knockout tournaments where you'll earn more cash for every elimination.

Everyday there are three progressive bounty tournaments of various buy-in amounts running at 9pm on PartyPoker. Buy-in every evening from Monday to Saturday on the regular tournament schedule.

Look out for the Sunday version of the tournaments where the prize pools are increased for the same buy-in amount.

With the new tournament format players progressively earn more for each player they eliminate during the tournament. Each knockout 50% of the bounty prize is paid to the winning player and the remaining 50% is added to their bounty.

Players all start off with a fixed bounty amount which increases for each player they knockout. The twist is that the more players you eliminate and get cash for, the higher the bounty on your head will become.

Players can win huge cash prizes as they get to the final stages of the tournament, the big stacks will have a big price tag on their heads.

The aim of the tournament is to eliminate as many players as you can and is more suited to action-loving or aggressive players, playing tight in these tournaments would not be a winning strategy.

These guaranteed tournaments will still feature a regular prize pool with a standard payout structure based on the finishing positions of players.