Party Poker have introduced a new Sunday Monthly Million tournament which will take place on the 1st Sunday of each month. The week leading up to the Sunday million will be filled with qualifying satellite tournaments which start from as low as one dollar.

Win big using PartyPoker super sign up bonus code : WAPBIG for a 100% match bonus up to $500 when depositing.

Don't miss out on the biggest PartyPoker tournaments on the first Sunday of every month. 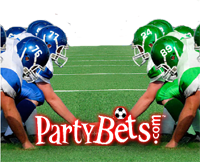