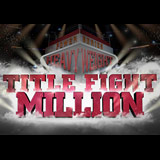 Don't miss out on the Party Poker Title Fight Million guaranteed tournament which takes place for one week only on 2nd April 2017.

The biggest weekly tournament will have it's prize pool increased to a whooping million guaranteed. Normally the Title Fight tournament has a progressive prize pool which is in the $300K guaranteed range.

For one day only the PartyPoker Title Fight tournament will have it's prize pool increased to a guaranteed million dollars for the regular buy-in amount of just $215.

There is also still time to qualify for the special event by winning a tournament ticket playing the various qualifiers and satellite tournaments on PartyPoker.

Players can win cash, tournament tickets and a chance to win a PartyPoker Live event package worth $8,000.

To participate players are required to earn points playing cash games on PartyPoker, get a click card for every two points earned.

Each click card contains a guaranteed prize, but players are limited to claim only five cards per day during the promotional dates.