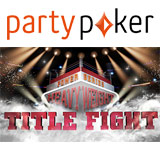 The Party Poker Title Fight tournament is the biggest weekly online poker tournament with a $300,000 guaranteed prize pool every Sunday.

The Title Fight tournament is part of the Power Series Heavyweight schedule where players can buy-in directly or qualify through satellite tournaments from as little as 1¢.

Step into the ring every Sunday and play for your share of the $300k guaranteed prize pool and claim the weekly title for full bragging rights.

Get ready for the biggest weekly event the Party Poker Title Fight tournament, starting 6th November the tournament will feature on the Power Series Heavyweight schedule.

Each week player will have the chance to be title-holding champion and play for a piece of the guaranteed $300,000 prize pool.

Players can buy-in directly for $215 on the day of the tournament or start playing for their seat from a little as 1¢ in PartyPoker comprehensive qualifying structure.

Party Poker satellite tournaments let players which step they would like to buy-in to play for their tournament ticket to bigger and better tournaments.

The satellites are available as regular tournaments as well as SNG tournaments which have only six players in each satellite.

You'll also have the option of exchanging your points for tournament tickets of all values from the Party Poker store. Tickets can be used to register for any tournament of the same value this includes: Power Series tournaments, step and satellite tournaments.

If you're new to PartyPoker and have not yet made your first deposit you'll be eligible for the welcome bonus. The Party Poker bonus is a 100% match of your deposited amount up to $500 and is issued as a bonus to first depositing players.

Earn points and clear your bonus by playing real money poker games on PartyPoker and double your bankroll with this bonus.

Use the latest Party Poker bonus code when signing up to ensure that you get the best bonus based on your Country or currency.