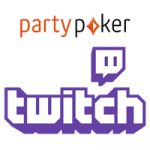 PartyPoker pro Patrick Leonard is the host of Tuesday Twitch but the popular poker site plan to offer a full streaming schedule soon.

Learn poker strategy and tips from the pros and watch how they play online poker cash games and tournaments on PartyPoker.

Join the new generation of live video streaming online, Twitch has welcomed poker players and pros to use their platform. You find solid poker advice on the Twitch channels of Jason Somerville, Jaime Staples, Phil Hellmuth and Daniel Negreanu.

Patrick Leonard is original from Newcastle Upon Tyne, UK who has since moved countries to Budapest, Hungary. Leonard is one of the new up and coming poker pros ranking in first place for online poker tournament in the World.

He studied journalism and fiance then moved on to becoming a poker ecologist, after his success playing poker he choose to make a career out of it and hopes to help fix problems within the poker industry.

Patrick Leonard and his online poker stats made him a highly sought after poker pro by several online poker site, but finally settled with a sponsorship from PartyPoker.

“I’ve been propositioned by a few sites over the years as I’ve always been a vocal and visible figure in different poker communities, but I always refused to be a puppet boy, or to say what I’m told. I’m very opinionated, many would say it was my biggest quality and many more would say it was my biggest flaw. I didn’t want to pick up a pay cheque whilst seeing my friends and colleagues get screwed over. At partypoker, they are actually doing progressive changes on a daily basis, but still have a long way to go until they really take over as the number one site in the world. I’m sure that I can help significantly and that motivates me a lot. I want to help make partypoker the best poker site in the world with the biggest guarantees and best structured tournaments. If we speak this time next year and we haven’t taken over then I would be pretty disappointed. The people behind the scenes at partypoker are incredibly ambitious and I think I match that ambition too, we’re a good match I think.” Team PartyPoker - Patrick Leonard