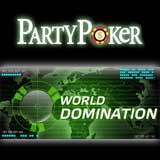 Dominate the World and win big on Party Poker, in the new global poker challenge. Similar to the popular board game of Risk, players must collect cities by earning Party Points in this promotion. Collect all 72 cities for World domination and win $100,000.

Start conquering cities around the World and win prizes on PartyPoker, here are the 72 cities waiting to be conquered.

Win cash prizes for dominating a continent collect all the Countries and cities from one continent and win the following cash prizes:

Collect all the Cities for one country and win the following cash prizes:

Win cash and freeroll entries for collecting the following cities:

Party Poker World Domination Freerolls take place between 2-6 September 2011, qualifying players will be notified by email. Players may only win entry into one of the online poker freerolls, any additional entries won will be given 5 Party Points per entry.