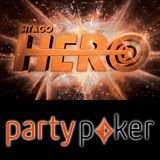 A new selection of PartyPoker Hero tournaments are available in the lobby, play for a million dollars, PartyPoker MILLIONS ticket or Power Series tickets.

The fast-paced SNG game lets players win cash prizes and tournament tickets in just a few minutes. These special edition tournaments offer specific prizes based on the game that you register for.

There is even a Sam Trickett version of PartyPoker Hero which has a million dollars as the top jackpot prize for a buy-in of $100.

Sam Trickett is the most successful UK poker player in history and recently signed up as a PartyPoker ambassador. To celebrate there is a special edition of Hero tournaments with a fixed buy-in amount of $100 and a maximum jackpot prize of a million dollars.

Play the Tricketts Sit & Go Hero tournament which is a high stakes version of the original game featuring four players and a randomly selected bounty prize on one of the registered players.

You could turn a buy-in of $100 into a life changing million dollars in just a few minutes. See the payout structure and jackpot frequency for the Tricketts Sit & Go Hero tournament below:

Play the PartyPoker MILLIONS Hero tournament and win tickets to the qualifiers or a direct buy-in for the Day 1 tournament valued at $6,750.

The special edition of the game doesn't have a bounty prize like the regular Hero games and is a three player tournament instead of four. Eliminating the bounty means that the payouts are bigger than normal.

See the payout structure and jackpot frequency for the MILLIONS Hero tournaments below:

The quickest way to win tickets to the Power Series tournaments is to play the new Power Series Hero SNG games. There is a set buy-in amount of just $10 and players can win tournament tickets valued at up to $2,600 for the top jackpot prize.

There are also less players to defeat as these game feature three players instead of four. There are no bounty prizes so the prizes pools are bigger that regular Hero tournaments. All prizes are paid out as tournament tickets exclusively for the Power Series tournaments on Party Poker.

See the payout structure and jackpot frequency for the Power Series Hero tournaments below: