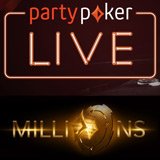 Play the PartyPoker live poker tournaments around the World, qualify online and win a seat to the live events and PartyPoker Millions.

On the Partypoker MILLIONS schedule are three live events taking place at Nottingham (UK), North America and Sochi. There are also two events on the 2017 Grand Prix series schedule for Cork, Ireland, Montreal and Canada.

Prefer playing online? then take a look at the tournament schedule for the upcoming PartyPoker PowerFest series.

The PartyPoker Millions will be the biggest guaranteed live poker tournament that the online poker site has ever hosted.

Play for your share of the $6 million guaranteed with at least one million for first place prize at the Dusk Till Dawn Poker and Casino in Nottingham, UK.

The PartyPoker Millions is scheduled to take place as a live event between 18th - 23rd April 2017. Players can play Phase 1 and Day 1 tournaments online at PartyPoker, the remainder of the tournament from Day 2 will be played live at Dusk Till Dawn Nottingham.

Buy-in directly for £5,300 or start qualify online in the daily satellites which start from just $0.01.

The PartyPoker Million North America tournament is coming to Montreal with over five million CAD$ guaranteed at the Playground Poker Club.

First place prize is a guaranteed CAD$1 million, Phase 1 and Day 1 tournaments can be played online at PartyPoker or live at the Playground Poker Club.

From Day 2 and onwards the tournament will be played out as a live poker tournament exclusively at the Playground Poker Club between 7th - 10th May, 2017.

Buy-in directly or start qualifying for your seat online with daily satellites running exclusively at PartyPoker starting from just $2.20.

Players can qualify online and win entry to the Grand Prix Canada, satellites are available at PartyPoker starting from just $0.01.

The winner of the event is guaranteed at least $200k for first place prize, players can qualify online by playing the daily satellite tournaments starting from $0.01.

Players can also play Day 1 of the tournament online at PartyPoker on the 12th or 19th March, qualifying players will be required to play Day 2 as a live event at Sochi Casino in Russia.