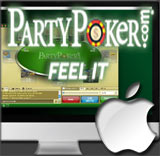 PartyPoker Mac version software has just been launched, after many years of being in the online poker industry PartyPoker have finally released a Mac version of their Party Poker software, previously only Windows OS was fully supported.

Following the lead of many other poker networks who already offer a downloadable Mac compatible version of their poker clients, PartyPoker have developed their own stand alone Apple Mac Poker game which will please many OS X players who in the past were forced to play the no download flash version of the game known as PartyPoker Anywhere.

Sadly for Mac Poker fans over the years, many poker networks have neglected the demand for Mac compatible poker software instead of developing stand alone Mac poker game clients users of Apple Macintosh computers were forced into playing poker via a web browser based flash client version usually known as a no download version on the bigger networks, these browser based versions usually lack many of the features found in the full Windows OS versions of the game another option was to run a virtual PC emulator in order to get the Windows based poker games to run on a Mac.

Full Tilt Poker's Mac version was among the best out there but unfortunately we all know they are in a spot of bother right now so those living outside of the USA will be really pleased with PartyPoker's new Mac Poker game, now that the PartyPoker Mac Poker client has been released you can at long last play PartyPoker.com's cash games on your Mac Computer.