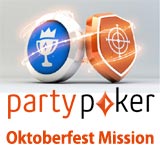 Play the Oktoberfest Mission on PartyPoker and win VIP tickets to a FC Bayern München football match at the Allianz Arena in Munich, Germany.

This offer runs for a limited time and will end on 6th October, players must complete three simple missions to qualify for the Oktoberfest Mission Freeroll.

Bwin.Party are the official sponsors of some of the World biggest football teams including: Manchester United, Real Madrid and FC Bayern.

Bwin and PartyPoker offer exclusive promotions to players with special football experience packages to be won.

Qualify for the Oktoberfest Mission Freeroll where the top 3 players will win VIP tickets to attend a FC Bayern München football match in Munich.

Players must complete all three poker missions during the promotional dates: 21st September until 6th October 2013 to qualify.

Winners are responsible for arranging their own travel and any documents needed to get to Munich, Germany.

Winners will be notified within a week of winning the Oktoberfest Mission freeroll with the details of VIP tickets dates and times.

The Party Poker software is available in several formats including; PC, MAC, iOS devices and Android mobiles and tablets.