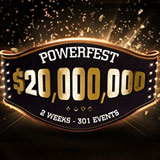 PartyPoker Powerfest 2017 is a $20 million guaranteed online poker tournament series with over 300 events taking place this May.

The tournament series will consist of four stake levels to accommodate players of all bankrolls with direct buy-ins from just $5.50.

Get ready for fifteen days of non-stop poker action at PartyPoker between 7-21 May, 2017. Start playing for your seat to the Powerfest series in the daily satellite tournaments.

Get ready for the PartyPoker Powerfest 2017 series scheduled to take place this May with a guaranteed $20 million spread across 301 events.

The biggest Powerfest series to date and features four stake divisions from micro to high stakes which change each week of the series.

The Main Events of each stake level in the tournament series will take place on Sunday, 21 May 2017. There is over two million in guaranteed prize pools to be won with four Main Events to choose from.

Throughout the Powerfest series there are an additional six tournaments which guarantee at least a million dollars. See the tournament schedule below to play for your share of million of dollars to be won between 7-21 May, 2017.

”I will be playing more online events than ever in this new edition of Powerfest on partypoker. The addition of the $25K Super High Roller is great and it’s a really nice touch from partypoker to donate all fees to charity.”

The Super High Roller charity tournament has a buy-in of $25,500 with $500 of each buy-in will be donated to the charity of the tournament winners choice. PartyPoker have added that if the tournament exceeds 100 players they add an extra $50,000 for charity.