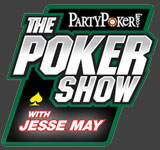 PartyPoker The Poker Show is a new online poker radio show hosted by Jesse May featuring news and interviews with your favorite poker pros. In this week's show Phil Hellmuth boldly states that it would be impossible for Phil Ivey to take the lead in WSOP bracelets earned in the next five years.

Now that is a prop bet I would like to see materialize, but until it does we have created a poll to see what your thoughts are.

PartyPoker are the sponsors of The Poker Show which is broadcast every week on Wednesdays and Sundays hosted by poker commentator Jesse May. Stream or Download The Poker Show episodes.

The Poker Show 4 - 12th July featuring an interview with Tom “Durrrr” Dwan from his trailer at the WSOP where he reveals some information about the prop bet which had many pros worried when he was heads-up in a WSOP event.

The Poker Show 5 (July 14) featuring an interview with Phil Hellmuth about his WSOP grand entrances, partying, his golf game and his lead in WSOP bracelets winners.

In the 5th episode of The Poker Show Jesse May asks Phil Hellmuth on his views of Phil Ivey beating his lead on WSOP bracelets earned.

What are your views on the matter so far Hellmuth is in the lead with 11 WSOP bracelets to his name and Phil Ivey has just earned his 8th WSOP bracelet this year.

In recent news Phil Ivey has just placed 3rd in the Bellagio Cup VI after his late registration into the event, this is Ivey's ninth final table finish in a WPT event. Late registration was available for players who were busted out of the WSOP main event.