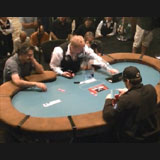 Phil Hellmuth wins 12th WSOP Bracelet in Event #18: Seven Card Razz, of the 43rd World Series of Poker. Hellmuth proves he's got what it takes to be a champion by extending his bracelet lead on Doyle Brunson and Johnny Chan who both have earned 10 WSOP bracelets.

This is Phil Hellmuth first non-holdem bracelet to add to his collection, last year Hellmuth was unsuccessful at capturing gold and finished runner up in three 2011 WSOP events. Hellmuth hasn't won a World Series of Poker tournaments since 2007.

Hellmuth's 12th WSOP bracelet for first place finish in the event #18 is worth more than his $182,793 winnings for the event.

Phil Hellmuth was up against a tough field of players with five WSOP bracelet winners on the final table including: Brandon Cantu, Scott Fischman, Brendan Taylor, Barry Greenstein and Michael Chow.

Phil Hellmuth eliminated Brandon Cantu in third place and was heads-up with Don Zewin who has 18 WSOP cashes to his name since 1989. The epic heads-up battle lasted over three hours, with Hellmuth taking down first place in the end.

For all the results of Event #18 Seven Card Razz see the World Series of Poker website.

While Phil Hellmuth was playing heads-up with Don Zewin, Phil Ivey was also on the final table of WSOP Event #17: Pot-Limit Hold’em. Phil Ivey even had the chip lead going into his heads-up match with Andy Frankenberger, but was unsuccessful in claiming his 9th WSOP bracelet finishing in 2nd place.