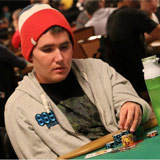 PHWAP'S BACK is a heart-warming story about Kevin Boudreau a poker player who suffered from a stroke while on a break in a 2013 WSOP tournament. He was rushed to hospital as his brain was hemorrhaging from an arteriovenous malformation in his brain.

Boudreau had the support from his family and poker friends who include: Peter Jetten, Gabe Patgorski and Mario Silvestri III.

In less than eighteen months Boudreau returns to the live poker tournament circuit and final tabled the first two tournaments he entered, proving he still has the skills dispute having physical and communication challenges.

The Kevin Boudreau story reached film director Ian Tuason who had been following his progress and thought his amazing comeback story would make a heart-warming documentary. Tuason contact 888poker to fund the project and they approved the funding of: Phwap’s Back: A Poker Comeback Story.

Kevin Boudreau is quite a character at the poker tables both live and online, and friends with the Ship it Holla Ballas crew who are known as a group of kids who made millions from online poker. Known by the nickname Phwap he regularly posted poker videos on his YouTube account with tips, strategies, updates and classic newsworthy stories.

Boudreau was famously known for the televised footage of the Bubble Hand of the 2010 WSOP Main Event where his character shine through when he gets into a bit of a sweat on the turn card.

Just three years after he missed the bubble boy title Boudreau collapsed by his car in the Rio Casino parking lot while on a break from a WSOP event. He was rushed to hospital with a rare genetic brain condition that had caused a stroke and hemorrhaging.

The chances of survival were not good and doctors and family were not sure if he would fully recover as he fought for his life and eventually stabilized. After waking they discovered that Boudreau was no longer able to communicate and would require much work to get some physical strength back.

Not long after he wanted to get back to the poker tables again in the form of online poker and was four table multi-tabling soon after and clearly hadn't lost his ability to play poker.

Boudreau returned to the 2014 World Series of Poker to support his friends just one year after the stroke, and started to get the itch to play live poker again.

Kevin return to the live poker circuit is pretty damn impressive as he registered for first live tournament the MSPT Main Event on the final starting day. Boudreau was back as he managed to secure fourth position in the tournament just eighteen months after the stroke. What's even more impressive is that when he returned four months later to play his second live tournament he final tabled another MSPT event.

At this point everybody knew he was more than ready to play the 2015 WSOP Main Event and it was his next goal progressing in live poker.

News got out to director Ian Tuason who had been following his progress and approached 888poker to fund this heart-warming documentary on Kevin Boudreau. Tuason was given the go ahead to create the short film Phwap’s Back: A Poker Comeback Story.

888poker also sponsored the buy-in for Boudreau's return to the 2015 WSOP Main Event, unfortunately he was eliminated on the first day.

Phwap’s Back: A Poker Comeback Story