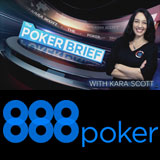 The Poker Brief with Kara Scott, Episode 3 featuring events and highlights from March 2017 including the Cate Hall vs Mike Dentale Grudge Match.

Some insight into the live poker boom in Europe with an increase of new events from PartyPoker and 888poker.

Details on the upcoming 888poker Super XL series which is scheduled to takes place between 7-21 May, 2017. The series runs for two weeks featuring 197 events with more than $7.5 million in guaranteed prize pools.

It started back in December when Cate Hall played a hand that even she admitted would look horrible when people saw the updates. Weirdly lots of people on the internet had an opinion about that.

One of them was Mike Dentale, who went straight for the jugular he told her she was a bad poker player. She challenged him to play her and the heads up grudge match was born.

Dentale tried to draw Kate up with some table talk, but she mostly focused on her game and she clinched the best of three early.

My sort of approach to the match was I'm glad that people got some entertainment out of it and I realized that that was a lot of the value for other people. But for me it was an opportunity for me to showcase my ability to play and to earn money and entertainment was sort of secondary for me. - Cate Hall

Live tournaments and festivals from poker in Europe are going through a bit of a boom lately, with old tours being retired new ones are popping up.

The shock announcement former EPT CEO John Duffy is now president of Party Poker Live definitely caught the industry's attention. He's long been a player favorite and he's been especially straightforward about his thoughts on stars and how the other major companies have been handling live events.

888 poker is also expanding their live poker offerings, with exciting new locations coming up for 888 live festivals this year like São Paulo.

Andrew Neeme started his vlog on youtube last year and it's quickly gained a lot of very loyal followers. He says he started the project because he wanted to add something more creative to his life aside from simply grinding poker.

Although he may eventually do something on Twitch his heart is with YouTube right now where he can come up with interesting cinematics and a more polished post produced product to his audience.

He's been active in prodding poker rooms in Vegas to create more welcoming atmospheres for the new and nervous players. So if you're thinking about playing live I'd suggest watching some of the videos to help you feel a bit more comfortable with the whole process.

The 888poker Super XL series is back from the 7th - 21st May with two weeks of poker action loaded with 197 events and over $7.5 million in total combined prize pools.

Play the online champion of champions tournament and you could win a package to play the World Series of Poker Main Event in Las Vegas.

This years Super XL series includes three charity events which 888poker will donate all chip in tournament fees to REG charity Raising for Effective Giving and the money will go to organizations in their global poverty charity portfolio.