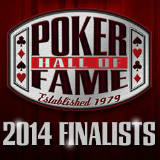 The Poker Hall of Fame 2014 Nominees have been announced, the list of 10 finalists who will be selected for the 2014 PHOF.

Nominees were selected through public nomination and the PHOF Governing Council will select up to two finalists to be inducted into the Poker Hall of Fame 2014.

Inductees will be announced just before the final table of the 2014 World Series Main Event on the November 10th.

The final decision will be made by the panel which consists of all the living Poker Hall of Fame members and 20 member media panel. The 41 member panel will cast their votes to decide who the 2014 Poker Hall of Fame inductees are.

The winners will be selected based on the amount of votes received by the panel before the deadline date October 10th. The induction ceremony will take place just before the start of the 2014 WSOP Main Event final table on November 10th.

The annual event was established in 1979 and selects one or two members every year to be part of the prestigious club of poker legends.

Daniel Negreanu is a favorite to win following a consistent year of poker and meeting the new age requirement of 40 years old this year. Not only is he a great ambassador for the game his accomplishments include a career earnings of more than $30 million with six WSOP bracelets and two WPT titles.

The top 10 finalists nominated for 2014 PHOF are as follows:

Players will be selected based on the following criteria:

Non-poker players may also be selected if they have significantly helped improve the game of poker.