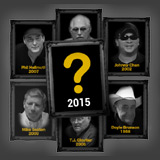 Poker fans can now vote online for the Poker Hall of Fame Nominees 2015, choose your favorite nominee and the reason they deserve the prestigious title. Nominees must meet the criteria to be count as a valid vote.

The top ten nominees from the online voting process will be given to the Governing Council for reviewing, the council will select one or two nominees to be inducted into the WSOP Poker Hall of Fame.

The chosen player/s will be inducted at a ceremony just before the 2015 WSOP Main Event final table starts in November.

Cast your vote for the Poker Hall of Fame Nominees 2015 and help decide which poker legend deserves to be the next honorary member.

When choosing a nominees make sure they meet the following requirements:

In some cases a non-poker player might be inducted if they have contributed to the game of poker and made substantial difference in growth and development.

Vote For Your Nominee Here

*Submissions end on 15th August, 2015, voters must be at least 21 years or older to nominate their favorite player.