Home » Posts » Poker News » Poker in Pennsylvania on the Cards 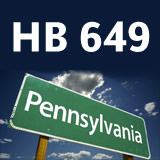 Online poker in Pennsylvania could be passed into law in 2016 after the HB 649 bill was passed by the House Gaming Oversight Committee this week. The committee approved the bill in an 18-8 vote in favor of Pennsylvania online poker and casino games online.

The HB 649 bill which was introduced by John Payne in February 2015 still needs to be voted on by the House and Senate and passed on to Governor Tom Wolf before it becomes state law.

Pennsylvania could be the fourth state to allow online gambling in the USA if California does not beat them to it.

Legal Poker in Pennsylvania could be a possibility in 2016 as the HB 649 bill passed it's first step this week when the bill received an 18-8 vote by the House Gaming Oversight Committee this Wednesday.

The HB 649 bill which John Payne introduced to the Gaming Oversight Committee last February was voted in favor of regulated and taxed gambling within state borders for residents of Pennsylvania.

“With the passage of H.B. 649, the House Gaming Oversight Committee has proven their commitment to providing Pennsylvania residents with a safe and regulated place to play online poker within their own borders,” said John Pappas, executive director of the PPA. “The PPA thanks Chairman John Payne and the Committee for their leadership. Now this bill needs to become law. The safety of consumers and the fiscal health of Pennsylvania will be vastly improved when Internet gaming is appropriately licensed, regulated and taxed. It is our hope that the legislation will be enacted on its own or as part of the state’s 2016 budget by the end of this year.”

The Poker Player Alliance headed by John Pappas has more than a million American citizens seeking to making online poker legal in the USA. There are over 25,000 PPA members who support the approval of regulated online gambling in the state. Poker players need to stand together and fight for their right to play online poker in Pennsylvania.

The current licensing requirements are not yet appealing enough for gaming companies as the tax rate for online gambling is up to 54% as proposed in a bill earlier this year. If the HR 649 bill is passed tax will be around 14% and gaming operators would need to fork out $5 million to acquire their gaming license.

PA poker players, you've asked "what more can I do" here is your answer. Visit our PA Take Action Page and share it: https://t.co/8zV53yTffM — PokerPlayersAlliance (@ppapoker) November 18, 2015