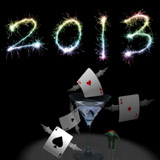 A quick recap on the biggest poker news stories and highlights of 2013 which includes:

Certainly an interesting year for poker with a brighter outlook for 2014 especially for online poker in the USA.

Donkey of the Year award goes to Sheldon Adelson for his hypocritical anti-gambling campaign, the award is passed on from Howard Lederer who held the position for two consecutive years.

Player of the Year was none other than PokerStars legend Daniel Negreanu.

The top poker news stories of the year with a brief summary of 2013 highlights of poker, click on the headline links to read the full story.

Legal regulated online poker was welcomed in three USA states this year: Nevada, Delaware and New Jersey. Land based casinos teamed up with software operators to offer US players the best online experience.

It was not glitch free to begin with as there are a few banking options which prevented players from depositing.

Stats are increasing with New Jersey poker leading the way with PartyPoker and 888poker as the software providers.

New Jersey poker got off to a good start with more than 100,000 registered poker player accounts according to a December 2013 report by the NJ Division of Gaming Enforcement.

New Jersey will be a good example and aid to getting online poker regulated in the rest of the United States.

PokerStars have not been able to get any piece of the action in the New Jersey market after having their license application has been suspended by the New Jersey Division of Gaming Enforcement.

There seems to be an issue with PokerStars CEO, Isai Scheinberg having a pending federal indictment against him for violating the UIGEA of 2006.

The biggest poker site PokerStars maybe suspended for up to two years while the accused executives are still affiliated with the company.

888 Poker have won the Best Poker Operator for three consecutive years at the EGR awards.

The 888poker have jumped up to 2nd place for poker traffic this December and are just below PokerStars.

World Series of Poker coverage was shown by ESPN2 and WSOP Live Streaming was sponsored by 888Poker worldwide and Slotmania in US.

Adrian Mateos is added to Team 888 Poker to represent Spanish players on 888poker.es

Two new members were indicted into the 2013 Poker Hall of Fame: Scotty Nguyen and Tom McEvoy.

Both players are worthy additions for their accomplishments in poker. Other nominations included: Mike Matusow, Huck Seed and Jennifer Harman.

The Poker Hall of Fame consists of 40 members, only 18 of those members are living legends.

Daniel Negreanu wins 6th WSOP Bracelet and the Player of the Year title in the final event of the WSOP Europe series, 2013 WSOPE High Roller Event.

Making the final table of the High roller event put Negreanu in first place on the 2013 WSOP POY leaderboard.

The process for Full Tilt Poker players to be reimbursed took place with more than $184 million to be refunded to US players.

The process began two and a half years after Black Friday when players funds were seized.

USA players were able to submit their Petition for Remission on the Full Tilt Poker Claims Administration website.