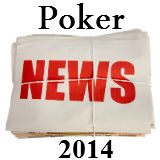 Poker News 2014 - A recap of the best and worst poker stories of the year for those who may have missed it. Highlights of the year including winners of the 2014 WSOP Main Event & Big One for One Drop.

The Worlds Largest poker site PokerStars was sold to Amaya Gaming in the hopes of entering the US regulated markets.

Poker Villain of the Year Award goes to Las Vegas Sands CEO, Sheldon Adelson for his efforts to get online gambling banned in the USA.

2014 Player of the Year is Daniel Colman despite having such a controversial year he managed to earn more than $22 million in 2014.

These are the top 10 stories of Poker News 2014, it's been a roller-coaster of a year for the online poker industry with regulation and legal issues in the USA. The Worldwide poker market is down 19% compared to last years statistics.

The best news of the year for US players was that their Full Tilt Poker funds would be returned to them after waiting more than 3 years. Full Tilt Poker claims approved by DoJ amounted to over $82 million paid back to more than 30,000 USA players.

The audit was conducted by the Garden City Group and approved by the Department of Justice.

Full Tilt Poker has still not yet returned to the US market but could possibly make a return in 2015 under the new ownership of Amaya Gaming.

The takeover of the World largest poker site took place in 2014 with Amaya Gaming taking over ownership of the Rational Group.

Amaya Gaming Buying PokerStars was the best solution for the company to return to the US market. Isai Scheinberg the founder of PokerStars was preventing the Rational Group from entering the regulated market as he still waiting to face charges for operating after the Unlawful Internet Gambling Enforcement Act of 2006.

There were some major changes to PokerStars throughout the year, the biggest being the introduction of Casino & Sportsbetting.

Some of the changes were not welcomed by the pros including Joe Cada who was denied his previous rack-back deal and PokerStars Casino not Endorsed by Vicky Coren.

PokerStars Future Under New Ownership was looking bright but as of yet no gaming license has been approved to operate in the US regulated market in 2014.

To celebrate 10 years of the WSOP at the Rio Casino, a guaranteed $10 million for first place prize of the Main Event was added in 2014.

The 2015 WSOP Main Event will see the return of the $10 million guarantee for two consecutive years. This has cause abit of distaste amongst the poker pros who would prefer a flatter payout structure.

Daniel Negreanu and Phil Hellmuth both shared their dislike of the guarantee on the social networks stating that it was not good for poker.

Jacobson won the first ever $10 million guaranteed first place prize despite being the 2nd shortest stack when the Final Table returned in November.

WSOP Big One for One Drop 2014 Winner

The WSOP Big One for One Drop 2014 Winner was Daniel Colman who defeated Daniel Negreanu in the heads-up stage of the charity tournament.

Colman who has had quite a controversial year, refusing any interviews from the media over his big win of more than $15 million in the One Drop event.

The War on Online Poker

The poker villain of the year award was given to Las Vegas Sands CEO, Sheldon Adelson in his effort to get online poker and gambling banned federally in the USA.

Adelson headed an anti-gambling campaign and was willing to spend whatever it takes to make gambling online a criminal offense.

The War on Online Poker will no doubt continue in 2015 as the biggest donator to the Republican Party, Sheldon Adelson will use his political influence to get laws passed.

A new anti-gambling bill was introduced to congress, the Restoration of America's Wire Act which would make any forms of online gambling illegal under federal law.

The bill was not passed in 2014 as predicted by analysts although it was feared that it was high on the agenda of the 2014 Lame Duck Session.

The Lame Duck Sessions took place with the Republicans having most of the seats in the House of Representatives.

Sheldon Adelson failed to get the anti-gambling bill passed in 2014, which would make all forms of internet gambling illegal including online poker, despite current state laws where poker regulation has been approved such as New Jersey, Nevada and Delaware.