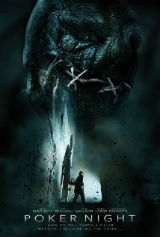 Poker Night 2014 movie is a new crime/action film which set to be released on December 5 and features some high profile actors including: Ron Perlman, Giancarlo Esposito and Beau Mirchoff.

A new rookie detective joins a home poker game to play against other cops who have been hosting poker night for over ten years, at the social gathering they discuss their work related stories and past crimes.

The rookie goes missing and is held captive in a basement with a young female who has also been reported missing, to escape the nightmare the detective needs to recall stories told from Poker Night.

The new poker film directed by Greg Francis features twists in it's plot and has been compared to the popular thrillers such as Seven and Usual Suspect.

So far Poker Night has receive an 8/10 rating by users on imdb.com and has a fairly unique plot adding a thriller aspect to a poker movie instead of the common crime/action format.

When you become a detective in Warsaw Indiana - you go to Poker Night, where you play against some of the best cops in the business. They tell you stories about their time on the job - their successes and failures.

When new Detective Stan Jeter leaves the game, he is caught by a vicious psychopath and locked in a basement. Using the stories he heard at Poker Night, he must match wits against his captor - and save not only himself, but the young girl trapped in the basement with him.

Like Seven and Usual Suspect, Poker Night combines thrills and twists and turns that will leave you guessing till the very end. - Source: imdb.com

Poker Night is one of several poker movies that have been released recently that will appeal to poker fans, be sure to also add the following poker movies and documentaries to your watch list: