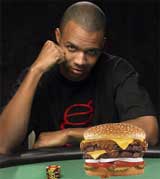 When High Stakes Poker pros get bored at the tables they love to challenge each other with some outrageous prop bets. Being the gambling type most pros will accept these challenges, recently on a High Stakes Poker episode Durrrr challenged Phil Ivey to become a vegetarian for one year.

Tom Dwan offered what could have been the biggest prop bet ever with a proposed one million dollars on the line, unfortunately the bet has since been canceled with Ivey buying out early.

The average player only has enough dollars to play poker online, the Full Tilt Poker miniFTOPS XV is underway it's an online tournament series which has great value buy-ins and decent prize pools don't miss out on the MiniFTOPS events taking place between 10 - 21 March 2010

Throughout history poker players have made side bets on the craziest things, they're willing to risk their money and reputations at any cost.

At the LA Poker Classic main event Joe Sebok , Jeff Madsen and Gavin Smith had bet to see who would last the longest in the tournament. The loser Joe Sebok had to get a tattoo of the other two players faces Madsen and Smith, the runner up Jeff Madsen would only get Gavin Smith's face tattooed.

Phil Hellmuth and Huck Seed had a bet of $50,000 that Seed would not be able to stand in the oceans for eighteen hours with his shoulders below the water, Seed failed the challenge after a three hour attempt.

Howard Lederer was once tempted by David Grey to eat a cheese burger for $10,000, Lederer being a vegan accepted the challenge and ate the entire burger for some extra cash.

The most insane prop bet would be Canadian gambler Brian Zembic who accepted a prop bet for $100,000 to get a silicone breast implants and leave them in for a year, he also won a bet of $15,000 in which he had to live in a bathroom for an entire month.

The MiniFTOPS is an online poker series at Full Tilt Poker which has a combined $6,000,000 in guaranteed prize pools. The online series takes place between the 10 - 21 March 2010 buy-in directly to each event for a low buy-in or win your seat by entering the daily qualifying satellite tournaments which start from buy-ins as low as $0.10 or 10 FTP