Poker Stars test out the latest Nintendo Wii poker game Excitebots: Trick Racing which is actually a racing game which includes various sport challenges including poker. Nintendo gathered some of the world best poker players to challenge their skills in a totally different poker format.

The four Poker pros, who are really competitive, take the Nintendo Wii Excitebots: Trick Racing challenge very seriously as they compete for the Main Event bracelet. The challenge was split into four elimination events where the loser of each round being eliminated until there are only two player left in the final heads-up event.

The event was filmed in a very entertaining manner at Daniel Negreanu house and shows just how competitive poker pros are when competing against each other. Watch the poker pros race around the track collecting cards along the way to complete the best poker hands and win the race.

If you can't see the videos please make sure you install the latest version of flash http://www.adobe.com/shockwave/download/download.cgi?P1_Prod_Version=ShockwaveFlash

Points are awarded when completing hands 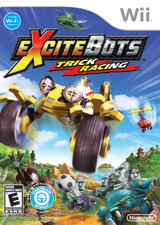 Although Excitebots: Trick Racing is mainly a racing game it incorporates many sport side games like Soccer, Bowling, Darts and Poker plus additional Clown and Sandwich modes. Up to 6 players can compete online using a Wii Wheel or the standard Wii remote. Excitebots was released on the 20th April 2009 for the Wii console and is sure to be a hit with poker players this year, especially if you enjoy poker and racing games. 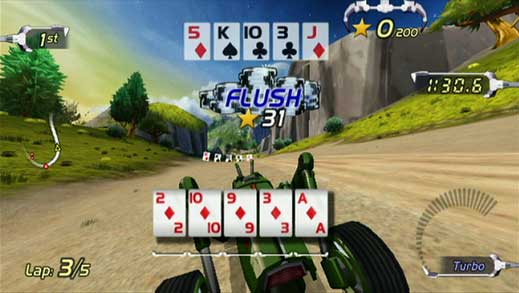