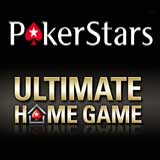 PokerStars are running promotions for the release of their latest edition to the poker software which includes Home Games, where players can create their own private poker club and play poker online with their poker buddies. Poker Club Managers can win prizes in the Ultimate Home Game freeroll which has $100,000 prize pool, including a trip for the winners poker club to a choice of four destinations, plus a private online poker tournament where you and your poker buddies can play against Team PokerStars pros.

New to PokerStars? sign-up for free, create your account and your own private poker club - get 100% first deposit bonus up to $600

PokerStars Home Game allows players to setup their own private online poker club, players can create their own custom tournaments and cash games on PokerStars and invite their poker buddies to play. To celebrate the release of Poker Stars Home Game there will be a $100,000 Ultimate Home Game freeroll where each poker club manager will represent their club in the online poker freeroll tournament. The winner of the freeroll will win a trip for their poker club to one of the following: EPT Snowfest (Austria), Vancouver (Canada), Macau (China) or Buenos Aires (Argentina). The trip will include a VIP poker game with Daniel Negreanu, Jonathan Duhamel and any Team PokerStars Pro of your choice. Ream more about PokerStars Home Game here.

To qualify your team in this promotion create a free poker club on Pokerstars Home Games, invite seven or more poker buddies to play then play two real money or 5 play money poker games before the 5 March 2011. Once completed the Poker Club Manager will be invited within three days to play the Ultimate Home Game freeroll $100,000 where he will represent the team.

The winner of the freeroll will win a trip for their poker club to play in a VIP poker game with Team PokerStars pros, each player in the club will be given $3,000 for travel & expenses, plus $2,000 each for the private VIP poker game.

To qualify your poker manager into the weekly freeroll, the poker club must play a tournament or cash game within 7 days of the freeroll. This promotion runs for 33 weeks with more Team PokerStars pros to be added.