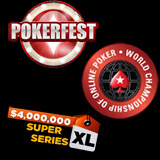 We've compiled a list of online poker tournaments and series that you should not miss out on in August & September 2016.

There are several upcoming tournament series with huge guarantees these include: PartyPoker PowerFest, 888Poker Super XL and PokerStars WCOOP 2016.

The top 3 online poker sites are all running a tournament series in September 2016 with millions in guaranteed prize pools to be won.

Clear the dates on your calendar and add these events to your schedule, signup and get a 100% bonus on your first deposit.

Get ready for a busy two months of poker tournaments this August & September 2016, start qualifying now for your seat to these events or buy-in directly on the day.

The biggest buy-in amount is just $2.20, including the Main Event which guarantees a $10,000 prize pool.

The Powerfest Mini Series is the micro-stakes prequel leading up to the Powerfest Series which is a low to high stakes online poker series.

Buy-in directly on the day of the tournament for $700 or qualify by playing the Day 1 tournaments for a $109 buy-in or satellite tournaments that start from just $0.01.

Play for your piece of more than $4 million in combined guaranteed prize pools that the 888 Poker Super XL 2016 has to offer.

Win your seat to the $1,5 million guaranteed Super XL Main Event and other events in the daily qualifier tournaments.

Win your ticket to the Main Event and other tournaments on the schedule for free, by playing the Super XL Qualifiers on 888 Poker.

New players get two free tournament tickets to the Super XL Qualifier tournaments when signing up for an 888poker account.

Claim more tickets by spinning the wheel of the 888poker Blast Poker promotion. You can also get tickets from the 888poker club lobby under the redeem tab using 50 Gold Tokens.

The PokerStars WCOOP 2016 features over $50 million in guaranteed prize pools and is schedule to take place between 4-26 September, 2016.

The highlight event of the 2016 PokerStars World Series of Online Poker is the Main Event which offers a guaranteed $10 million.

Satellites are running daily giving players a chance to win their seat for a fraction of the direct buy-in amount.