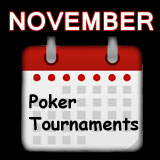 Getting great value in online poker tournaments is what it's all about for tourney players.

This November there are some tournaments which offer excellent incentive to play and are available from PartyPoker, 888Poker, Befair and WinnerPoker.

If winning some cool gadgets and prizes is your thing check the PlayStation 4 Freestival promotion or if it's decent guaranteed prize pools is what you're after play at Betfair, WinnerPoker for the iPOPS V series.

Players might also want to start planning ahead for the massive $2,5 million Super XL Series on 888Poker, start qualifying in the daily satellites or win a seat for free in the Super XL Freerolls.

USA and Canadian poker players can play the Poker Power Play tournaments for daily guarantees, only available this November on Bovada and Bodog Poker.

See the promotions summary's below or click on the links for more information about that specific promo or download the poker software to start playing for cash and prizes.

PartyPoker are running a PlayStation 4 Freestival where players can win a PS4 everyday for free. This November PartyPoker will be giving away Sony gadgets as prizes in several tournaments.

Party Poker have even added a PS4 to some of the Sunday Major poker tournaments and selected guaranteed tournaments giving players more value for winning the event.

There will also be a $10k & $30k Giveaway tournaments where players can will all sorts of digital products including: Xperia smartphones, Smart TV's, Laptops, cameras, iPods, Hoodies, T Shirts and much more.

Play for your share of prizes in the PartyPoker PlayStation 4 Freestival qualify for free chance to win daily. - Download Party Poker

The iPOPS V Series kicks off from the 16th November - 1st December 2014, the iPoker Online poker series offers more than a million in guaranteed prize pools.

Satellites are also available, players can qualify for all of the events by playing their way into the series.

Freerolls and satellites for the Super XL Series are currently underway at 888Poker, start qualifying for the series that offers more than $2,500,000 in guaranteed prize pools.

The Super XL Series take place between 1-8 December 2013 giving players some time to get their tickets to the tournament series.

888Poker are running a special Super XL Freerolls promotion where new players get free tournament tickets to play for seats to the Super XL Series.

USA poker players can win a share of $140k weekly in the Bovada Poker Power Play tournaments which run daily from 12th November until 15 December 2013.

There are 15 guaranteed events which are all take place between 9-10 PM (ET) Mondays to Saturdays and Sundays at 4-5 PM (ET).

Game types include: NL Holdem, PLO,  Deep stack and Knockout tournaments with a variety of different buy-ins to suit all stake levels.

Check the Bovada Poker Power Play tournament schedule for dates and times this November, US players only or Bodog Poker for Canadian poker players.