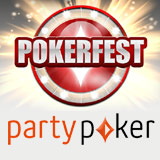 PartyPoker is proud to announce the Pokerfest Live & Online series which features a total of ninety tournaments with more than $3 million in guaranteed prize pools.

The online poker series takes place online at Partypoker and the live tournaments will take place at Dusk Till Dawn, Nottingham.

Players can take part in some exciting promotions during the qualifying dates including poker missions, qualifiers and golden chips.

PartyPoker have combined their popular Pokerfest online poker series with a live tournament series at Dusk Till Dawn, Nottingham.

Pokerfest live is scheduled to take place between 28th August and 6th September at Dusk Till Dawn, Nottingham the largest UK poker room. There is over £620K in guaranteed prize pools to be won in the live poker tournament series which runs for nine days.

Players can qualify online between 1st July - 1st September, there are at least 30 live event entries for the Main Event to be won every Sunday.

Qualify from as little as 10 cents in the daily satellite tournaments on PartyPoker, players can register for the satellites in the PartyPoker lobby by clicking on: Tournaments->Live Events->Dusk Till Dawn.

Players can also earn Golden Chips online at PartyPoker which will boost players earnings in the live tournament if they reach the final table of the Pokerfest Main Event.

Earn up to five Golden Chips between 1st July - 31st August all players with Golden Chips will be entered into the Last Longer bet where players can win extra prizes for finishing in the top 100 in the live Main Event tournament. Players can claim their golden chips by earning the required amount of points playing online poker or casino games online on PartyPoker.

The popular Pokerfest series returns to PartyPoker between 27th September - 11th October featuring eighty tournaments on the schedule adding up to a total of $2.5 million in prize pools.

Satellites for the online poker series starts from 1st July until 11th October, players can win their seats for a fraction of the direct buy-in amount.