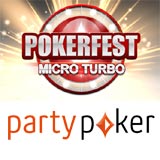 The Pokerfest returns to PartyPoker this December for the Micro Turbo Edition a perfect promotion for recreational players during the festive season.

The micro stakes poker tournament series has more than $270k in guaranteed prize pools with buy-ins starting from a mere 11¢.

Get your piece of the action at PartyPoker between the 1-15 December with sixty seven turbo fueled events to partake in.

A leaderboard will be running to reward the players with the highest ranking scores throughout the series with a prize package to a World Poker Tour event for the winner.

Join Party Poker for the ultimate micro stakes poker series and win your share of the prize pools for fifteen days from 1-15 December.

Play as many tournaments as possible and rank in the leaderboards for every in the money finish, prizes for the top 10 players include tournament tickets and a WPT prize package for first place.

The World Poker Tour package can be used to for either: WPT Borgata Winter Poker Open, WPT Fallsview or WPT Venice.

There will be a PartyPoker mission available where players can win tourney dollars for the series by completing the mission objectives on three different levels:

Rewards: $6 worth of tournament dollars

Reward: $22 worth of tournament dollars

Reward: $54 worth of tournament dollars.

See the tournament schedule below for all the events in the micro stakes edition of the PartyPoker Pokerfest.

Mega satellites are also running offering with buy-in of $1-$2 and guarantee 150-200 seats to the bigger events in the series.

Register for these events on the tournament tab in the PartyPoker lobby after downloading the software.