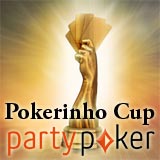 The Pokerinho Cup in a series PartyPoker tournaments which will take place during the 2014 World Cup football. Players can win Sony prizes, PartyPoker bonuses and tournament tickets plus free sportsbets.

The promotion kicks off from 12th June until 11th July with a hyper turbo poker tournament taking place after every football match.

The Pokerinho Cup is structured similar to the football schedule with qualifying group stages where players can qualify for the Final tournament.

Win some great prizes in the Pokerinho Cup PartyPoker series which offers a poker tournament after every football match in the 2014 World Cup in Brazil. The action on the poker tables be as intense as the football games as all tournaments are in hyper turbo format.

Whenever a football match finishes simply login to PartyPoker for your chance to step into the arena and win a selection of prizes during the promotional dates.

The Party Poker Pokerinho Cup will feature low buy-ins with decent prizes for players which includes: a range of Sony gadgets, tournament tickets and tourney dollars, poker bonuses and freebets for BwinSports.

Sign-up with the correct Party Poker bonus code below, new players get a welcome package with their first deposit at PartyPoker.

Use the latest PartyPoker bonus codes to get s first deposit bonus in different currencies and countries.

Register for the Pokerinho Cup tournaments and play your way from the group stages to the grand final to win prizes in the 2014 World Cup promotion on PartyPoker.

PartyPoker are among many online poker sites who are running 2014 World Cup promotions: