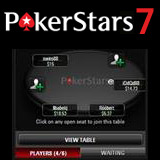 Get a sneak peek at the brand new PokerStars 7 software which is soon to be released as a closed beta version. The new PokerStars client will be the first major updated since PokerStars launched more than 10 years ago.

There have been some major improvements to the PokerStars software, mostly geared towards a simpler user-friendly lobby and faster sign-up process for new players.

The Worlds leading online poker site have released new games and platforms which include PokerStars Zoom Poker and PokerStars Mobile App for Android, iPad and iPhone.

PokerStars 7 is currently in beta stages of it's release and player can expect a software update soon.

PokerStars Representative Lee Jones responds: ‘The main goal was to make the new client as newbie friendly as possible. We wanted to minimize the amount of mouse clicks between a player logging on and being dealt cards.’ and warned that this is an ‘alpha version of the product and there might be changes before the software got to the store shelves.’

PokerStars 7 is expected for beta release before the end of October 2012, expect to see the official release shortly after.

One wanders if they've had a good look into the design of Full Tilt Poker since acquiring their main competitors software and assets recently. The Full Tilt Poker software was ahead of most poker clients in terms of design and technology.

Full Tilt Poker Relaunch date is set for 6th November 2012 under the ownership of PokerStars.

Full Tilt Poker Room Manager Shyam Markus comments: "I've seen a number of posts assuming that since PokerStars does something some way that now Full Tilt Poker will necessarily do it the same way. This isn't the case. FullTiltPoker will be managed separately from PokerStars and the offerings and experience will continue to be unique to the online poker world."

Players will be able to Download Full Tilt Poker on the 6th November and cashout or continue playing with their bankrolls reinstated. There will be special promotions and December will see the return of FTOPS the popular online poker tournament series.