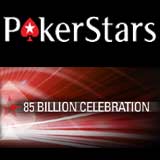 PokerStars 85 Billion Celebration win up to a million in cash prizes in the PokerStars Road to 100 Billion promotion. PokerStars are celebrating milestone poker hands offering players a chance to win huge prizes along the way.

Play PokerStars Cash Games to qualify for this promotion, hands played on PokerStars Mobile are valid but PokerStars Zoom Poker hands do not qualify.

Players who are dealt every millionth hand up to 85 Billion receive a cash prize based on the amount of PokerStars VPPs earned over the last 50 hands played.

Celebrate 85 Billion hand dealt of PokerStars and win your share of thousands of dollars when a milestone hand is dealt. PokerStars are celebrating the Road to 100 Billion Poker Hands and are approaching the 85 Billion milestone soon. This is an incredible achievement for the Worlds Largest Poker site.

The player who is dealt and wins the 85 Billionth hand will get at least $20,000 in cash and up to a million in cash prizes for players who are dealt into every million hands up to the goal. There are a total of 300 milestones at every million hand intervals throughout this promotion.

Players can monitor the number of PokerStars hands dealt by check the top left hand corner of the screen when playing cash games on PokerStars. Players can increase their chances of winning by playing more than one cash game table or playing longer session on PokerStars.

Prizes are based on the amount of VPPs earned over the last 50 hands played before the milestone hand is hit, so earn as many PokerStars VPPs just before a target milestone. Double your cash prize by winning a milestone hand, all players who are dealt into the hand also receive a cash prize.