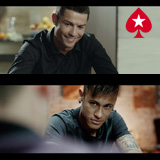 The videos have been posted by the Team Sportstars on the official Facebook pages where the two football stars have a combined fan base of over 157 million.

The PokerStars commercials will reach a wider audience than any of their previous campaigns, both PokerStars adverts feature the football stars having fun playing a competitive home poker game with friends.

The new PokerStars adverts feature the footballers enjoying a game of poker at home with their friends. The short films were produced by Vaughan Arnell who is known for his work on Robbie Williams music videos.

The PokerStars Ronaldo Commercial was filmed in Madrid and features the soundtrack of The Heavy - How You Like Me Now? The plot includes an intense home poker game that gets interrupted by a pizza delivery guy. Ronaldo takes a timeout to pay for the pizza and get a photo with the delivery guy before returning to the poker table and shoving all-in on a bluff.

“I always bring the intensity, flair and determination I show on the football pitch to the poker tables. I love the game, and I’ve always loved the challenge of beating my opponents one-on-one. By joining the world’s biggest poker site, I can test my skills against the game’s best players and become one of them.” - Cristiano Ronaldo

Cristiano Ronaldo is currently the World football Player of the Year and also has a passion for poker, Ronaldo is also a sponsored player on PokerStars Team Sportstars.

Neymar Jr - The Game was filmed in Barcelona and references football training and a home poker game. A classic car drives by passing the footballers on it's way to the poker game where Neymar Jr is having fun playing poker with his friends with his dog by his side.

The car stops outside the house and Brazilian footballer Ronaldo arrives to play poker and foosball. There's lots of action in the poker game and Neymar Jr raises Ronaldo who shoves all-in, both players have pocket kings.

“Poker is a huge passion of mine. It allows me to express myself away from the pitch, and I love any chance to outwit my opponents, show my skills, and beat the competition. Now I want to push myself against the world’s best players. I want to experience the thrill of PokerStars games and see if I can win poker’s biggest prizes!” - Neymar Jr

Neymar Jr is a Brazilian footballer and is recently signed to Team PokerStars Sportstars.