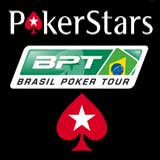 The PokerStars Brazil Poker Tour is a brand new series of events taking place around Brazil, the first event of the Season kicks-off in Sao Paulo between the 21-25 July 2011. Qualifying tournaments will be running on PokerStars where players can win a Brazil Poker Tour prize package to play the BPT main event.

There are poker freeroll tournaments running where players can win their seat for free, download PokerStars and create a free poker account.

The first leg of the BPT stops off in Sao Paulo at the Hotel Transamerica Sao Paulo, from the 21-25 July 2011.

Download PokerStars
Create a Free Poker account
Register for Qualifiers in the PokerStars lobby by clicking Events then BPT.

The first Season of the Brazil Poker Tour has been announced by PokerStars with more information to be released soon.

Buy-ins for the Brazil Poker Tour are shown in Brazilian Reales, R$ 2,000 is converted to approximately $ 1.400 USD. 3% of the prizes pools will be deducted as Fees for Dealers and casino staff, plus R$ 50 of every buy-in is charged by the Brazillian Confederation of Texas Hold'em.

There are daily qualifying tournaments and freerolls where players can win a seat for free or a fraction of the price. PokerStars sponsors live poker events around the world, players can qualify exclusively on PokerStars for these events:

Pokerstars also offers players a chance to win prize packages to the World Series of Poker and Aussie Millions.