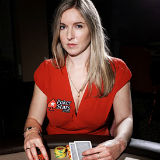 PokerStars Casino Games is the reason for Vicky Coren's departure from Team PokerStars, in her recent blog post Victoria Coren-Mitchell states that those casino games at unfavourable odds which can be (especially online) so dangerous for the vulnerable or desperate.

The Team PokerStars Pro has been a team player since 2007 representing poker the game she loves and signed up for, with poker the odds are not in favour of the house but rather on the individual players' skill level.

Victoria Coren made her decision just hours after the announcement that PokerStars Casino games will soon be launched in the poker lobby with sportsbetting to follow in 2015.

The new PokerStars casino software is just one of the many changes and additions since Amaya Gaming bought PokerStars for $4.9 billion from Isai Scheinberg earlier this year.

As an avid poker player Victoria Coren-Mitchell refuses to represent PokerStars, which was once purely dedicated to being the best online poker site in the World, who have now expanded their gaming platform to offer casino games and sports-betting.

She announced her contract termination with PokerStars in her recent blog post on the official Victoria Coren website stating the following:

On Friday night, PokerStars.com announced that it will be rolling out online casino gaming alongside its internet poker. As a result, on Saturday morning, I terminated my endorsement contract with them.

Their news was very sudden, so I didn’t have much time to consider my position, but I knew I had to act quickly before I could think better of it. Obviously this is a scary and sad decision for me to make. I have been with PokerStars since 2007 and Team Pro has been a core part of my identity. Obviously I will miss the money and am nervous of managing without it. Also, ironically enough, my plan for the next year or two had been to travel less and play more online.

But I can’t hang around, sleep on it, have meetings and talk myself into staying, when my gut tells me that the right thing is to walk away. This is no criticism of PokerStars itself: business is business, they are providing a new service that people want, and I know they intend to abide by some key principles of responsible gaming. It’s not anti-casino either; I spend a lot of time in casinos, and I have been known to indulge in live table gaming.

But I cannot professionally and publicly endorse it, even passively by silence with my name still over the shop. Poker is the game I love, poker is what I signed up to promote. The question I’m probably asked most often in interviews is about the danger of addiction, going skint and so on. I’m always careful to explain the difference between the essentially fair nature of poker, where we all take each other on with the same basic chance, and those casino games at unfavourable odds which can be (especially online) so dangerous for the vulnerable or desperate. Although PokerStars assured me I would not have to actively promote the casino arm, I know in my heart that continuing in my current role could risk helping to send people to a place where they would encounter something I think is dangerous. That’s not the way I want to make a living.