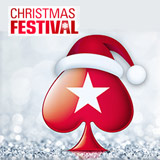 The PokerStars Christmas Festival 2016 offers over five million dollars in cash and prizes this festive season right up till 26th, December.

On the schedule for the Xmas promotion is the million dollar freeroll tournament, two million guaranteed Monday million and Christmas calendar.

The world's largest poker site also hosts the MicroMillions series which will appeal to recreational players with low buy-ins and huge guarantees.

Be sure to try the new PokerStars Beat the Clock tournaments, the latest addition to the software.

The festive season has officially started and runs until the day after Christmas with over five million to be won in the PokerStars Christmas Festival 2016.

There are all sorts of things are on the cards this season including a million freeroll, $2 million Monday Million, MicroMillions and Christmas Calendar.

The PokerStars Million Freeroll tournament is available to all real money players and takes place on the first day of the PokerStars Christmas Calendar, 1st December, 2016.

Play for your share of the million guaranteed prize pool with $10,000 for first place prize, get your ticket to the million freeroll.

There is over two million in cash and prizes to be won on the PokerStars Christmas Calendar running from 1st -25th December, 2016

Unlock a new PokerStars offer daily by opening each door on the day of the calendar and start winning the following: Card Hunt, challenges, freeroll tickets, giveaways & bonuses.

The tournament is the final promotion of the PokerStars Christmas Festival 2016, buy-in directly or win a ticket through satellites which start at just $1.

First place prize is a massive $200,000 for the winner of the event, see the tournament details below:

Player can register for the event in the PokerStars lobby under the Tourney tab.