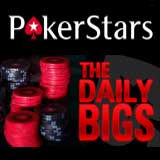 PokerStars have added The Daily Bigs to their tournament schedule, these new online poker tournaments feature guaranteed prize pools where players can win their share of thousands of dollars every day of the week.

Players can also win a Free 2011 SCOOP tournament ticket for playing The Daily Big three times. The PokerStars SCOOP 2011 takes place between 8-22 May, a PokerStars reload bonus code has been released, players can get a 50% reload bonus up to $200

Play the new Daily Big Tourneys and get a free PokerStars 2011 SCOOP tournament ticket by playing any of the Daily Bigs three times to qualify. Win your share of these daily guaranteed tournament prize pools, players can also win their seats to these events by playing one of the many satellite tournaments for a fraction of the price.

Pokerstars is celebrating the Daily Big Tourneys by offering players free 2011 SCOOP tickets for players who play three of the Daily Big tournaments before the 7th May 2011, if a players plays The Big $55 three times he will be credited with a 2011 SCOOP tournament ticket worth $55.

New to PokerStars? Get a 100% first deposit bonus up to $600 using the PokerStars bonus code below when depositing.

Use the latest PokerStars Releoad Bonus code to recharge your poker account for the PokerStars 2011 SCOOP online poker series, players get a 505 reload bonus up to $200 when making additional deposits with the Poker Stars Reload bonus code below.

Reload your PokerStars account for the Spring Championship of Online Poker, one of the biggest online poker tournament series which features massive prize pools spread across 38 poker events which take place from 8-22 May 2011.

Please note that the PokerStars Reload Bonus is only valid until the 8 May 2011.

To qualify for this bonus players must reload their PokerStars bankroll using the reload bonus code, the bonus is available in four different currencies (USD, Euro, GBP or CAD)

To clear the reload bonus players must earn 20 VPP's for each $1 of the bonus which is released in $10 increments, the entire bonus must be cleared before the 31 May 2011