PokerStars have given Daniel Negreanu his own High Stakes Poker table on Poker Stars, players can play against the legendary PokerStars Team Pro online and it doesn't matter if you wear sun glasses or not.

All registered PokerStars players can also watch the action from the rail and chat to the pros when they are playing poker online at PokerStars Daniel's Room.

Daniel Negreanu plays exclusively at PokerStars, get a 100% deposit bonus up to $600.

PokserStars players can play High Stakes Poker ring games against Daniel Negreanu, when he is at the tables. So far there have been three tables added to the PokerStars High Stakes limits. Players who impress Daniel Negreanu at these high stake poker tables will be considered for an upcoming PokerStars TV show. The poker tables are all six handed No Limit Holdem ring games available at the following stakes.

Daniel Negreanu's new High Stake Poker tables can be found in the PokerStars lobby by clicking on Hold'em then No Limit/Pot Limit. The tables all have a red DR symbol to highlight the table, you can also show Daniel's Room table by using the lobby filter. 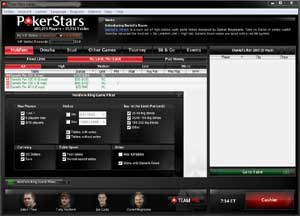 If you can't afford to play at the Daniel Negreanu high stakes tables registered PokerStars players can still watch all the action from the rail and chat to the players at the table.

Daniel Negreanu has been complaining about the use of sun glasses in live poker and banned them from being used in the latest PokerStars TV show "The Big Game" as he feels it's a form of cheating.

"I'm so happy when I see online guys like Tom Dwan, Patrik Antonius, and Phil Galfond man up by not hiding behind shades. The majority of the best players in the world DO NOT wear sunglasses. One of the biggest differences between live and online poker is the ability to see your opponent. Eyes and all. Doyle Brunson doesn't wear shades. Phil Ivey doesn't wear shades."