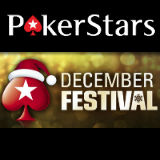 The PokerStars December Festival is jam-packed with events and promotions where players can win extra cash this festive season.

All the promotions combined offer a whooping $15 million in cash to be won throughout the month of December.

The PokerStars December Festival 2014 is currently underway with huge promotions going down at PokerStars this December, win your share of the $15 million in cash prizes.

New players can get in on the action by completing the steps below:

A special Spin & Go promotion that runs for the entire month, allows players to turn a low buy-in of $5 into a massive $1 million in just a few minutes. PokerStars Spin & Go tournaments are now the rage, players can win jackpot prize up to 1000 times their buy-in amount.

There will be a PokerStars Milestone Hands promotion with a million in prizes to be won on the cash game tables with over 300 milestone hands to be hit, players seated at these tables when hit get their share of a huge payday.

PokerStars Knockout Week consists of a series of Knockout & Progressive Knockout tournaments running the entire week with over $5 million in guaranteed prize pools including a Main Event.

An exciting PokerStars Zoom Promotion that rewards players with up to $50 in cash every-time they are dealt two red Aces and win the hand, players are then required to share the hand using the Boom Hand Replayer.

A selection of the biggest Sunday tournaments will run twice this includes the PokerStars Sunday Million, Sunday Kickoff, Sunday Warm-Up and Sunday Storm.

PokerStars biggest tournament just got five times bigger with a massive $5 million guaranteed , the PokerStars Sunday Million will payout at least half a million dollars for first place prize. Players can qualify from as little as $1 for their seat to the big event.