PokerStars.es have released their PokerStars Android App for Spain with the iOS version expected to be released shortly. The mobile version of PokerStars has already been launched separately in the UK, Italy and France then made available to the rest of Europe via PokerStars.EU and PokerStars.net

Spain recently introduced their own licensing regulation for online poker, PokerStars have subsequently been granted a licensed to operate in Spain and all Spanish players are required to play on Pokerstars.es

The mobile version of PokerStars was unavailable on the PokerStars.es domain until today, its addition will allow players to install the android PokerStars mobile app and play either Hold em or Pot Limit Omaha with SNGs, tournaments, cash games, PokerStars Zoom with multi-tabling supported.

PokerStars.es is fenced from the rest of the world and Spanish players for now have no option other than to play against their fellow Spaniards due to licensing constraints, it is rumored that sometime next year Spanish players will once again be incorporated into the worldwide PokerStars player pool.

The latest version of PokerStars Android app can be downloaded directly from PokerStars.es

One other point to note is that Spain uses their own bonus code for first time deposits be sure to check our PokerStars worldwide bonus code page to ensure you use the relevant bonus code.

The iPhone and iPad versions of PokerStars.ES i.e. the iOS app have yet to be released to Spain at the time of writing, but they can be expected sometime in the near future and once they are ready you should find the latest version at:

The rest of Europe, “well the rest excluding those with country specific licensing” can find the PokerStars mobile app at: PokerStars.EU/mobile, we also have more information about the Pokerstars mobile app for iPhone and Android devices, you should be able to locate the correct version you need from there.

Alternatives to PokerStars Mobile can be found on our Mobile Poker page. 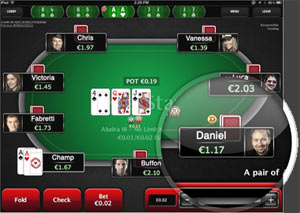 Mobile Poker has certainly come a long way over the last few months, mobile phones especially the newer generation smart phones and Tabs have made it possible to have fully functional mobile apps including online poker which all work seemly with the new technology.

It certainly seems like Androids Google Play App Store and Apple’s App Store are the clear cut winners to date and put rivals Nokia to shame with what apps are currently available.

I guess over the next few months and/or years Nokia the once market leader may resurface as a winner seeing that Microsoft now own them and have a smaller app store http://windowsphone.com/en-US/marketplace

Who knows what Windows 8 may bring in terms of Microsoft Nokia phones, time will only tell.

The only conclusion is that it’s all good for online poker, it’s just a pity the technology missed the poker boom.