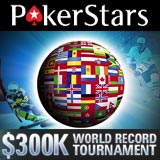 Help break the record for the largest-ever poker tournament in the PokerStars Guinness World Record Tournament 2014.

The record breaking tournament is scheduled for the 23rd February, 2014 with a low buy-in of only $1.

PokerStars have limited the amount of players to 230,000 which is just 5,000 more players than their previous record.

*Update - PokerStars failed to break the new record only 211,619 players registered for the tournament.

In order to break their previous record for the biggest poker tournament, PokerStars have to get more than 225,000 players which was the record set in June 2013.

Every year the player limit and prize pool increases in the PokerStars Guinness World Record Tournament, in 2014 there is a massive $300,000 prize pool.

Players can register for the tournament by clicking on Tourney->Special or type Record into the Tourney search.

No tournament fees will be charged for the tournament and PokerStars will be adding $70k to the prize pool.

Buy-in directly, play your way from satellites for just $0.10 or deposit for a tournament ticket.

Register early to avoid disappointment, the Guinness World Record Attempt tournament is limited to the first 230,000 players. Once registration closes all players who have tournament tickets will be unable to use them.

Read my comment below to find out how to get a totally free Guinness World Record Attempt tournament ticket for a limited time from PokerSchoolOnline, PokerStars poker coaching website.

Make a deposit before the 23rd February and get a PokerStars Entertainment Pack which is filled with tournament tickets based on your deposited amount.

Additionally players can get tickets to all-in-tournaments by earning the required amount of VPP's for the bonus code they deposited with.