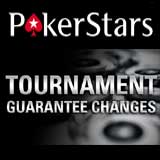 PokerStars have increased their Guaranteed Tournaments offering bigger overlays to it's players, including events like the Pokerstars Sunday Majors, Saturday Line-Up and The Bigs. PokerStars Mobile Poker App has also also been released and available to Italian and UK poker players, allowing players to play poker online from anywhere.

PokerStars have also acquired their Malta Gaming license and launched the new European version of the software.

See the changes to the PokerStars guaranteed tournaments below:

Every Sunday The Daily Bigs will be double prize pool as shown below.

Good news for UK players, the PokerStars Mobile Poker App is now available in the UK as well as Italy. The new mobile platform lets players play PokerStars on their iPhone, iPad, iPod touch or Android device. To get PokerStars on your mobile device players need to do the following.

Then Download PokerStars Mobile Poker App for your iPhone, iPad or any Android device.

PokerStars mobile will soon be available to players from France, Denmark and Spain

Players can expect to see the release of PokerStars Zoom Poker sometime in March 2012, the new software is PokerStars version of Full Tilt Poker Rush Poker.

A PokerStars player requested a version of Rush Poker for PokerStars and a PokerStars representative responded by saying that PokerStars is developing a fast moving ring games product. We expect it to be available for public beta testing in a few months.