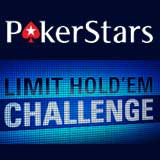 PokerStars Limit Hold’em Challenge is a new series of High Stakes Poker Heads-Up matches on PokerStars. The first two contenders are PokerStars Pro Daniel Negreanu against an unknown player known as rUaBot, all that is known about this player is that he is a Limit Hold’em specialist.

The first PokerStars Limit Holdem Challenge kicks off on Saturday, 5th May, players are welcome to watch these High Stakes Poker games from the rail, simply download PokerStars and watch all the action online.

The match will take place on Saturday, May 5th 2012 @ 2PM ET, don't miss out on these regular high stakes games which can be watched for free by downloading the Pokerstars software. You can find these games by clicking on ‘Hold’em’ then ‘Fixed Limit’ in the Pokerstars lobby.

If you miss any matches you can still catch up on the results, and upcoming matches on the PokerStars website. The PokerStars Limit Holdem Challenge will feature some of the best high stakes poker players in the World, expect some intense action at the highest stakes available.

Start your Pokerstars bankroll with the minimum deposit starting from $10, play poker online at the largest online poker site. PokerStars will double your deposited amount up to a maximum of $600.

Contact PokerStars support for any questions or to arrange a PokerStars Limit Hold’em Poker Challenge match.

Pokerstars have almost dealt their 80 million hand since opening their doors in 2001, to celebrate players stand a chance of winning up to a million in cash prizes for being dealt into a milestone hand.

Win your seat to a Main Event of your choice on Pokerstars, qualify online for a prize package worth $13,000 to any of these events:

Qualify for your Pokerstars Main Event Passport for as little as $2, there are satellites tournaments running daily where players can buy-in with cash or VPP.